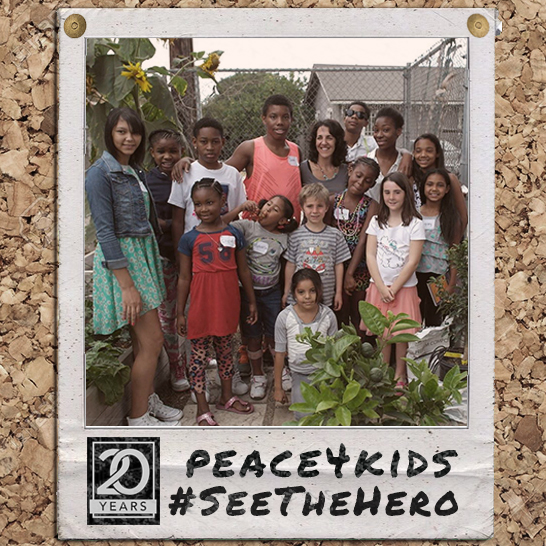 In honor of Mother’s Day, and our 20-year anniversary, Peace4Kids co-founder Marni Otway shares how she found the courage to use her voice to expand the Peace4Kids model to New Zealand.

I met Zaid 20 years ago and was immediately drawn in by the power of his voice. When he spoke, people listened intently. His confidence and relatability were undeniable. He seemed to be comfortable with all types of people and could engage with them on a deeply personal level. He was everything that I wished I could be. He became my confidante, my partner and my guide. It was this relationship that led to the creation of Peace4Kids and it was the youth that inspired me to expand to New Zealand.

Growing up, my lack of confidence made me an easy target for kids in school. Bullying had me questioning my worth, and I kept my pain hidden which only made the darkness feel more eternal.

My older brother was highly intelligent and excelled in school. Being two years behind him in the classroom, his former teachers expected excellence from me… I did not oblige. I wished I was smart, but school was never easy for me. What made it worse was even if I knew an answer I couldn’t articulate it well.  Even at big family dinners, I remained quiet for fear that I wasn’t going to say the right things.

When I turned 11, my parents separated and my dad moved out. I tried to win him back but never knew the right things to say.  I really didn’t know who I could talk to about my feelings so I journaled about my own death to prevent me from taking such drastic actions. I packed the pain away in my suitcase of incompetence and just moved through life.

As time went on, although I was often unsure of the power of my voice, one thing was clear - that I would help children discover that they are worthy of love and that their voices could be heard….regardless of their circumstances.

In 1998, Zaid and I started a Peace Garden in Watts. At the time, I had no idea how much it would impact my life. Zaid became the big brother and father figure, while I welcomed the role of the “mother heart” - holding the space for the feminine to be present and ensuring that our youth were nurtured and loved.

The closer we got with the youth, the more we learned about their unique way of communicating, and the more I learned about myself. It was often what was NOT said that were the keys to what was most needed.  While other kids their age were out testing the boundaries of their parents, our youth were living in fear that if they said the wrong thing, they could be moved homes and be forced to start all over again – new school, new friends, new family.

This forced us to listen deeply to what their actions were saying.

For example, a child might cut in the lunch line, or stuff their pockets with food NOT because they are bad or stealing, but because they’re hungry or possibly fearful that there won’t be enough food for everyone. Or, a youth might act-out or insist on not going to class – really saying that he or she seeks a one-to-one connection.

While making a difference for thousands of children, and helping to change the foster care system, I also learned that one of my greatest strengths was communicating through action. Co-Founding Peace4Kids became my greatest success. It is more than I could have ever imagined.  I had finally done something that I was proud of.

8 years ago, I moved to New Zealand with my family. It was a tough decision to leave Peace4Kids, but I needed to step away from foster care and raise my children. I felt as though I could resign from social work knowing that I had done the best job possible.

However, as my kids got older something began to change.  I was leading this idyllic life but had become aware of the problems in the foster care system in New Zealand. The stories of the voiceless Maori children were stoking a new fire in my soul.  I went back to school to earn a social work degree. I also decided that I was ready to do the work so I decided to become a foster parent.  As a young social worker, I always wanted to take the kids home when there was nowhere for them to go and now I can. As I began to meet some of the 6,100 children in foster care I knew there was a need for a similar program to Peace4Kids. Still lacking the confidence to speak up for what I believed these children could benefit from, I called on Zaid.

In his trips to New Zealand, Zaid sparked conversations about what changes were needed and reminded me of the enthusiasm and spirit that led to the creation of Peace4Kids. As he spoke to the youth in our community, he reminded me of my own ability to listen and take action.

Radical issues during difficult times need radical leaders. It was time for me to deepen my personal commitment and let go of my fears. Time for me to embrace my voice, my gifts and my leadership on my own.

Together with a team of radical leaders in New Zealand, we recently launched a foster care agency that adopts a combination of philosophies from Peace4Kids and a model for children from hard places called Trust Based Relational Intervention (TBRI®), we are recruiting new foster carers and providing training to lead our social workers and caregivers down a path that will change the way foster care is delivered in our country. While I still struggle with what I might say, I now know that through action the voices of youth in care will be heard.

As we celebrate our 20 Year Anniversary, we encourage you to take a lesson from our youth and embrace the traumas that have shaped your life. To #SeeTheHero and to affirm your greatness.

Step into our Heroes Circle by clicking the button below and making a monthly donation to help build a sustainable future for youth transitioning out of foster care. 100% of your donation funds strength based, youth focused programming in South LA - honoring each youth’s unique needs, experiences, abilities and legacy. In return, you'll: