20 Years of Peace4Kids - I am Present 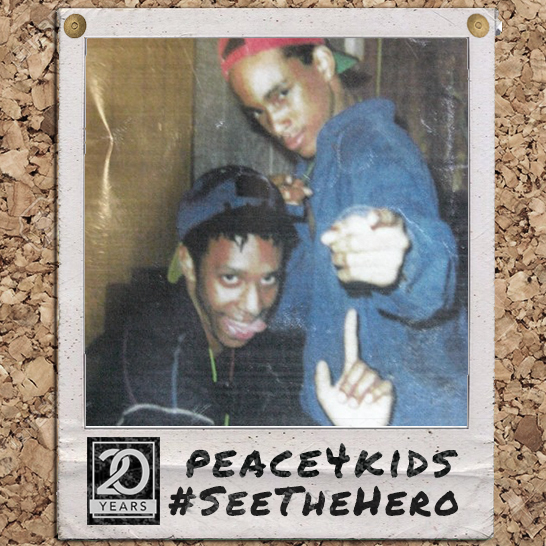 At Sunday’s Family Dinner, we encouraged our Teens and mentors to share a time in their life when they felt stuck. When they knew that their mind was holding them back, but also trying to tell them something profound.  They were asked to share that feeling with someone close to them and to come up with an “I am” statement that reflected the change they were looking to make - an affirmation that would help them transcend their current state. For the past 20 years, mine has been “I am present.”

I started this organization when I was 23 years old, and truthfully I contemplated giving up many times over the past 20 years. I had a difficult time understanding the needs of the youth we served and while I could somewhat imagine the foster care journey, I did not have the life experience to fully empathize. When I turned 27, that all changed. Peace4Kids was an all-volunteer organization, and I had built a successful career in the film industry. I was recently married and thought it was time to commit to my career and start a family. At the time, Peace4Kids felt like an impediment to that goal. Then I got a call that changed my life and perspective forever.

My best friend Jevon was like my brother. By the time we were 5, we were inseparable. We were so in sync, people thought we were twins. We did everything together. Every winter Jevon and I would go to youth camp on Catalina Island. At one particular camp, I felt a little off and was not quite sure why. Jevon attempted to bring me out of my funk but was unsuccessful. I tried to talk to the camp counselors but struggled to find the words. Since I was fourteen years old, everyone just attributed it to the fact that my hormones were shifting and that emotions can be hard to navigate during this time.

In the middle of the night I woke up at camp with an incredible pressure in my chest. I was filled with anxiety and couldn’t breathe. I snuck out of the cabin to get some air and found myself walking alone, drowning in my own thoughts. It was a rainy and cold night on Catalina Island, and the weather only added to my distress. As I walked, I suddenly began to realize what my anxiety was attached to… I missed my grandfather. My grandfather had been the sage of our family and he had passed during this same time two years ago. I had never cried about his death and suddenly that burden was swallowing all the wind in my lungs. I walked as fast as I could, hoping to catch my breath. Before I knew it, I was standing at the edge of Bibles Peak. Below me I could see the waves crashing against the rocks. I stood there imagining how at peace I would be if I could crash on the rocks like the waves. Without thinking I started to walk to the edge of the cliff ready to take a leap. Before I could jump, my brother Jevon grabbed me from behind and pulled me back. He wasn’t big on expressing his emotions, but it was the first and only time that he told me he loved me. Without telling him what I was feeling, he told me he missed “grandad” too.

Thirteen years later I’m wrapping up a day on a film set and Jevon gives me a call. He doesn’t have much to say and (because I’m working) the conversation is short. He makes me promise to call him when I’m done and I half-heartedly commit so I can get back to work. It took us a while to wrap up so I decide not to call him on the way home. I go to sleep that night and am woken by another call. On the other end is Jevon’s sister Tasha. She’s hysterical and I can barely understand what she’s saying. After a couple of minutes, clarity sinks in and my heart drops… Jevon has just jumped from a building and has been rushed to the hospital.

By the time I get to Cedars Sinai, it’s too late, Jevon is gone. His wife, Jamila, is sitting outside of the hospital completely broken. My dad is consoling Jevon’s parents, but Jamila is alone. I rush to her side to offer my support but all she can talk about is their son. “I’ve got to tell Jay-Jay that his dad is gone. He’s only 6 years old… this isn’t fair.” I nod in agreement and as I walk Jamila in to get Jay-Jay, the turmoil of Jevon’s jump has the neighbors rushing to Jamila to console her. Knowing that Jamila does not have the resolve to tell her son about his dad’s death, the task has been left to me.

As I search for the words to tell Jay-Jay about Jevon, all I can think about is the countless kids at Peace4Kids who have lost both their fathers and their mothers. While this realization doesn’t make my job in the moment any easier, I am strengthened by the fact that I have to believe that Jay-Jay will be okay. He has to be. If I expect the youth at Peace4Kids to thrive in the face of their traumas, then Jay-Jay must do the same. As heart broken as Jay-Jay is with the news, he asks if he can come over to my house. I quickly pick him up, grab some clothes and rush him and Jamila out the door. In the car, he shared the things that he loved about his dad and what he was going to do in his life to make him proud. It was the willingness of Jay-Jay to dream of a better tomorrow that reminded me of the resilience in our children.

That day, all of Jevon’s family ended up at my house. We cried through the pain and comforted each other, but I was crippled by the guilt I felt for not calling my brother back. Thirteen years earlier my brother walked me from the cliff, just because his instincts told him something was wrong. I did not heed his call and now he was gone. In that moment I committed that I would always be present for someone who needed my support. I immediately quit working in the film industry and committed to raising the funds to make Peace4Kids sustainable.

Our kids continue to inspire us to live openly and honestly and to not hide from the traumas we endure. I suppose that this is the true hallmark of service. A desire to so deeply be of service to others that your own suffering becomes an example of what is possible if you abide by the principles of peaceful resistance. Your breakdowns become the breakthroughs that move your community to action. Your tears become the rivers that flood the streets with new possibilities because they wash away the idea that the way things were will ever exist again. Our collective suffering is the key to ensuring the world we envision will endure.

As we celebrate our 20 Year Anniversary, we encourage you to take a lesson from our youth and embrace the traumas that have shaped your life. To #SeeTheHero and to affirm your greatness.

Step into our Heroes Circle by clicking the button below and making a monthly donation to help build a sustainable future for youth transitioning out of foster care. 100% of your donation funds strength based, youth focused programming in South LA - honoring each youth’s unique needs, experiences, abilities and legacy. In return, you'll: